The enclosed photo shows something I made in my back garden with all of the old bowls that were stored at the club and not wanted.  Dave Sykes 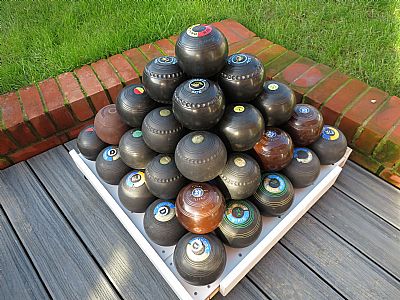 Our annual invitation day took place on Sunday 18 August 2019.  We welcomed 24 teams from 18 clubs from around Sussex.  These included some new faces as well as many old friends from previous years.

The day would not happen without a lot of hard work by many people within the club, too many to mention by name.  But without all those who helped with the catering, the setting up and packing away of the gazebos, setting out the tables and chairs, setting up the rinks and the green equipment, raffle, £50 note, book stall, target bowls, bar, scoring, umpiring and many other small jobs the day would not be possible.  In the end, hopefully, it will turn out to be a great fund raiser for the club so my heartfelt thanks go to all those who helped.

The bowling itself went to plan with the two groups of 12 teams all playing 5 matches of 5 ends to determine a winner and runner up in each group.  We almost managed to keep to the planned timetable but we suffered a 10 minute hold up due to a heavy shower half way through the blue groups first set of matches.  Apologies to all those who got wet!   Apart from that the weather was very kind to us and there were no other interruptions throughout the day.

The final was played between Fuller Beer, Brian Beeney Rose Fuller and Mal Fuller, and Gilldredge, M Cunningham, M Doust and G Murray, with Gildredge coming out on top.  So congratulations to Gildredge.

Once again, many thanks to all those involved, both the visiting teams and all our club members who helped make the day a success.

The Club Afternoon Scheduled for Sunday August 11th has now become a social event with a Barbecue and Fun Quiz with Music and Entertainment following the Bowls match.  Members, social members and guests are all welcome to come along and spend a relaxing afternoon and evening at the club with friends old and new.

The whole thing kicks off at 3.00pm and the Bar and Barbecue will be open for business at aproximately 6.00pm.  Lets hope the weather stays fine.

A big thank you to our Social Committee for arranging this event.

Our ladies were not so fortunate in the Lifeboat Competition quarter-finals when they were beaten by Parade, who also won the semi-final and are now in the final.

Two teams of our ladies played in the Lifeboat Triples Competition today.  Both teams were drawn against different teams from Gildredge Park.  One team enjoyed a very good close match but very sadly beaten 14 shots to 8.  The other team, consisting of Edie, Norma and Ann won their match by 26 shots to 10 - well done ladies!!!  They will now be playing in the quarter-finals at Hampden Park next Tuesday morning, 9th July.  GOOD LUCK IN THE NEXT ROUND.

Yesterday our ladies played the second round of Double Rink against Seaford.  At both the home and away matches the number of ends won by each club were very close, however Seaford won the match by the overall point difference.  Hailsham were congratulated for their warm welcome and excellent tea after the match.  Well done ladies.

HOT OFF THE PRESS - Our ladies won their first round Double Rink match today against Woodingdean - the Away team won by 28 shots to 13 and the Home team drew 23 shots each making the final score Hailsham 51 shots - Woodingdean 36 shots - WELL DONE LADIES!!!  The next round will be against Seaford on Thursday 4th July at 2pm.  GOOD LUCK TO ALL OUR PLAYERS.